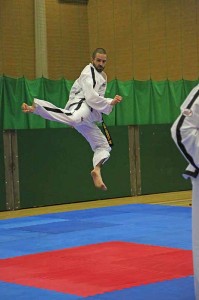 Tunbridge Wells Taekwon-Do instructor Luke Thompson has been selected to represent England at the World Championships in Spain later this year. Mr Thompson was selected for England to go to the European Championships earlier in the year and despite not getting a medal has some good performances. He had to go through two selection trials since then and also won a sliver medal at the Celtic Cup. It will be a tough 3 months but worth it.