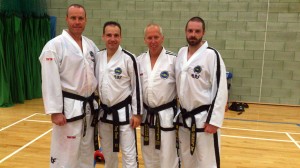 Vision with the coaches

Tunbridge Wells instructor Mr Thompson took one of his students, Sarah Budd and another student from Crowborough, Nick Edmunds to the seminar. It was an amazing experience, 3 hours of non-stop sparring drills. It was great to see so many students from different groups attending just to practice Taekwon-Do with no politics. The seminar was conducted in a great atmosphere, with both instructors exuding enthusiasm and inspiration.

We look forward to the patterns seminar in June and guest seminar in September.